Summer 2020, saw the second outing for Save the World (Wide Web) - an exercise where school children, teachers, and professionals from across the police and intelligence services with academics and industry experts deliver ‘emotional inoculations’ to the dangers of on-line harms. The event tackled the challenge of online grooming into sexual exploitation and the fake news of conspiracy cults.

The virtual event was run from the newly-opened GCHQ Manchester, their first public engagement in the new centre and was sponsored by BAE Systems Applied Intelligence. Staff from both GCHQ and BAE Systems joined forces with both the University of Manchester and University of Chester to design two scenarios of children under threat. Participants, including pupils from 4 schools from Greater Manchester and Cumbria were supplied with (sometimes misleading) intelligence and they had to analyse the situation and guide the threatened children to safety. Two parallel scenarios ran (with one facilitated by Professor Emma Barrett, Director of Digital Trust and Security, University of Manchester).

The challenge was to run a sequence of plenary sessions and facilitated workshops in an engaging, on-line environment. Finding a suitable application – and running it across a myriad of devices and platforms (and flaky broadband) was no mean feat. Enter Rozita Karami of the Youth Federation and ACS MSc graduate. Roz evaluated and tested several platforms, helped us to select the best match, and then calmly orchestrated the on-line activities.

The risk of the simulation becoming real for a young person who may have suffered – but not disclosed – the horrors that may be experienced on-line, was something the organisers were concerned about from the early planning stages. Imagine the need to counsel a child who has held back from crying for help about on-line child sexual exploitation until such an exercise. With that in mind, we worked with Tink Palmer, Marie Collins Foundation (MCF). MCF drew up a policy for supporting young people throughout the day and Tink and her team laid out a plan for young people to seek help after the exercise too whether that’s in the short, medium, or long term. On the day, young people could go to a ‘safe room’ where a therapeutic counsellor was ready to help them.

The event was chaired by Dr Victoria Baines (visiting fellow at Bournemouth, Oxford, Stanford, and Cyber Warrior Princess. Victoria was at the heart of the design and coordination, drawing on experience in law enforcement and a stint at Facebook.

This new offer can now be run publicly or targeted for schools and other institutions that are challenged with keeping young people safe on-line. It’s a unique experience of multidisciplinary, age-agnostic collaboration, where adults are most likely to learn from the children. Contact Professor Daniel Dresner for further information - daniel.dresner@manchester.ac.uk. 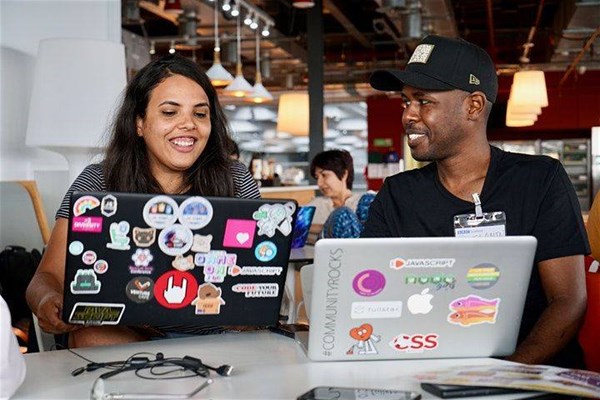 BLOG: How CodeYourFuture are changing lives through coding