GMCA and its partners are working to make Greater Manchester one of the best places in the world for people to grow up, get on and grow old – and we are on a journey to achieve that. But the prevalence of gender-based violence represents a major barrier to achieving our ambition.

Abuse is deep-rooted in gender inequality and subconscious bias, which has developed over generations, and occurs irrespective of class, ethnicity, faith, sexuality or where you live.

Campaigns such as #MeToo and #TimesUp have given the issue more exposure. More recently, the outpouring of emotion and testimonies following the tragic abduction and murder of Sarah Everard and the murder of Sabina Nessa, demonstrates all too clearly there remains much that we must do to tackle gender-based violence head on.

The response from Greater Manchester to our #IsThisOK? campaign video showed that our city-region knows that there are behaviours from men and boys that need to change in order to make women and girls be and feel safe.

It is clear that there is a problem, and now we want to make change happen to sort it.

That’s why we have produced a Gender-Based Violence Strategy. Our Strategy sets out a comprehensive, responsive programme of service delivery to enhance the safety of women and girls, while preventing gender-based violence from occurring in the first place and challenging the attitudes and inequalities that enable it.

Our aim over the next 10 years is to deliver a radical transformation in Greater Manchester’s approach to gender-based violence and that women and girls will experience a step change in their experience of abuse and violence in all its forms.

You can read the strategy in full here:

A new Gender-Based Violence Board has also been established, which will drive the implementation of the strategy over the next 10 years. 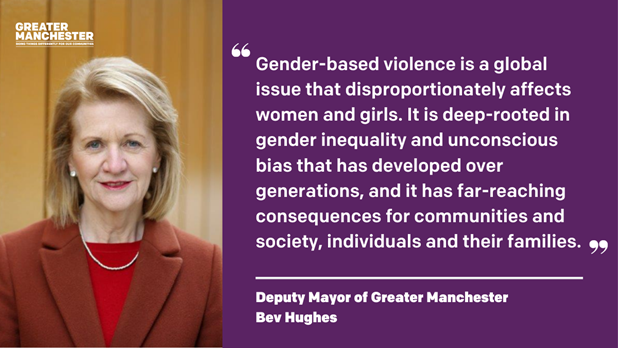 Our strategy was developed following extensive work with a range of people who support those affected by abuse and violence, including the police, offender services, health services, education, safeguarding experts, and community and voluntary sector organisations. Most importantly, we have talked to many women who have personal experiences of gender-based violence.

In March 2021, we published a draft strategy online and invited people to share their views on it. We received 68 responses and in addition to altering the title and definition of the strategy, we made several other amendments.

In June 2021, GMCA launched a full public consultation including an online questionnaire, which received 150 responses.

The public consultation ran from 22 June to 1 August. Our full consultation response, published in September 2021, can be found here: