Key figures from across Greater Manchester have come together to mark International Women’s Day (Friday 8 March). Celebrating the social, economic, cultural and political achievements of women, the theme of this years #IWD2019 is #BalanceForBetter, reflecting that a balanced world is a better world. Holding its first meeting ahead of International Women’s Day, a Women’s Voice group has been established in that will work to check and challenge policymaking in Greater Manchester. Today the Mayor of Greater Manchester, Andy Burnham, addressed Manchester’s International Women’s Day Conference – an event run and attended by women’s networks and equality groups from across the civil service and non-departmental organisations.

He said: “Real change is beginning to happen – culture change is coming finally, in a way I’ve not seen before in my lifetime. But we still live in a world that’s more challenging for our daughters than it is for our sons, and more needs to be done.

“Time has come for substantial devolution so we can deliver change from the bottom up. We’re already beginning to show how we can work differently to change lives for the better in Greater Manchester, and I have a hope that, through devolution, Greater Manchester can set the new standard for culture change and gender equality in the UK.”

The Mayor of Greater Manchester also announced today that GMCA will be supporting Unite the Union’s Period Dignity campaign which aims to ensure that women and girls will be able to access sanitary products in the workplace and schools. 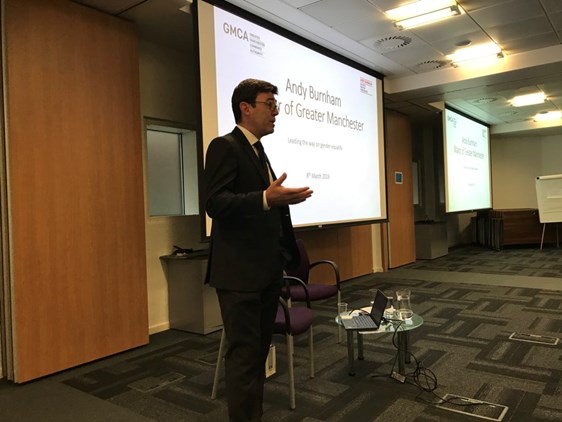 As an organisation, Greater Manchester Combined Authority (GMCA), is proud of its commitment to equalities, and inclusivity lies at the heart of its workplace practises and employee policies.

Full GMCA meetings have a balanced representation of both men and women; 5 of our 10 district chief executives are women; and 58 per cent of staff at GMCA are women. But there is still a 2% gender pay gap that we are working to address.

GMCA Chief Executive Eamonn Boylan said: “Creating a workplace that reflects the communities we serve is key to delivering the highest level of service to the people of Greater Manchester. Working together, we will take full advantage of our diverse backgrounds, ensuring we continue to evolve and develop as an organisation.

“As chief executive, I take seriously my responsibility to forge a gender-balanced workplace: one that tackles unconscious bias head-on, invests in and develops all its staff, promotes gender diversity in senior roles, and enables all its people to contribute to our culture and future direction.

“My personal commitment remains to refuse to take part in any all-male platforms or panel events, and I call on my colleagues to do the same. Only by calling out gender bias in all its forms can we continue drive the equality agenda forward.”

Throughout the day, we have been sharing our #BalanceForBetter messages on our Twitter and Facebook accounts relating to International Women's Day and the importance of gender balance in Greater Manchester.