People living in Greater Manchester are encouraged to look out for each other and to be kind on the eve of this year’s Hate Crime Awareness Week.

Hate crimes are crimes committed against someone because of their race, religion, disability, trans identity or sexual orientation. These are the personal characters currently identified by law, however in Greater Manchester we also record hate crimes against alternative sub-culture.

Crimes of this nature can include verbal abuse, intimidation, threats, harassment, assault, bullying, or damage to property. 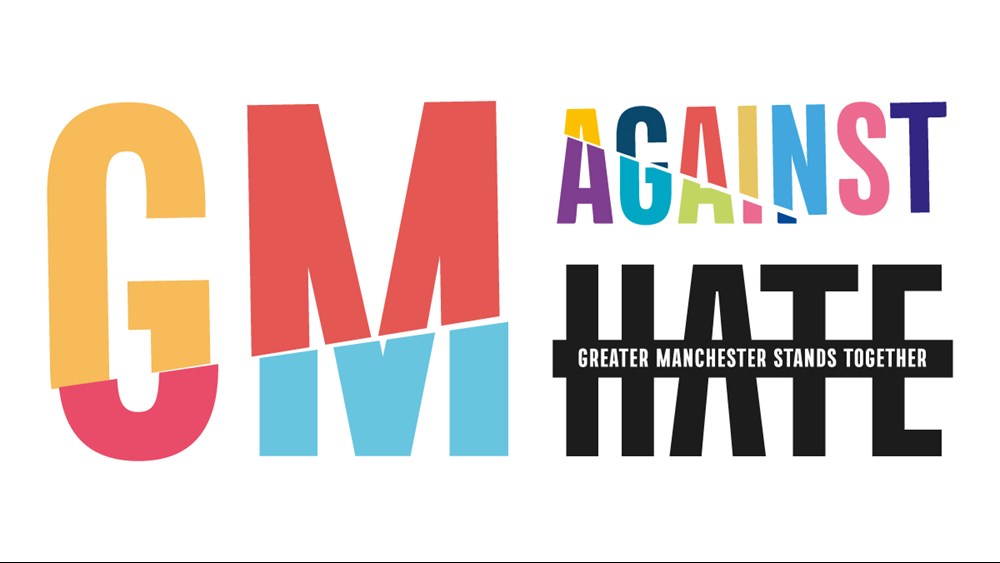 Greater Manchester’s Hate Crime Awareness Week takes place from 1-7 February, with events this year moving online due to the ongoing coronavirus pandemic. The aim of the week is to raise awareness of hate crime, while also encouraging victims to report hate crime incidents in the city-region.

The week will begin with a launch event on Monday, 1 February, opened by Deputy Mayor of Policing and Crime, Bev Hughes, and attended by partners and those who work in hate crime. Many events are also taking place during the week across all 10 boroughs including a Q&A session with the LGBT Foundation, a series of podcasts created by Miners Community Arts and Music Centre as well as a virtual roundtable discussion hosted by CARISMA Services.

Bev said: “Despite the ongoing challenges of Covid-19, tackling hate crime very much remains a priority in Greater Manchester and I am proud that once again we’re raising awareness through Hate Crime Awareness Week.

“Our city-region is a welcoming place made up of diverse communities and we want everybody to be happy here. But even in Greater Manchester there are some individuals who attempt to spread intolerance and commit hate crime.

“We will not stand for hate and division here in Greater Manchester, and we will continue to build on the positive work and partnerships built across our ten boroughs with the aim of working together to eradicate hate crime. Last year we also launched The Plan to Tackle Hate Crime, which outlines our commitment, in partnership, to tackle hate crime by raising awareness and ensuring access to reporting channels and support services for victims.”

Superintendent Rick Jackson, Greater Manchester Police’s tactical lead on hate crime, said: "Throughout the pandemic, we have seen our communities supporting each other through challenging times. This is what Greater Manchester is known for, and hate and intolerance threatens that cohesion.

"The Force recently provided funding from the Proceeds of Crime Act (POCA), which is money that has been obtained illegally by criminals but can now be used to fund community projects, to local hate crime prevention charity – We Stand Together. The money will help the charity deliver anti-discrimination workshops to schools, colleges and youth groups throughout Greater Manchester.

"Hate Crime Awareness Week is a great opportunity to raise awareness of hate crime, but our message stands throughout the year – we are here for victims, to listen, take appropriate action and offer support services, and to offenders, that hate crime will not be tolerated.

"I would strongly encourage anyone who has been a victim or a witness of hate, to report it to Greater Manchester Police on '101' or visit www.letsendhatecrime.com to report or receive help and support.”

Councillor Nigel Murphy, Deputy Leader of Manchester City Council, said: “This year more than ever we have seen that Manchester is stronger when we all stand together.

“No one should have to face abuse and discrimination for simply being who they are, and the right to express oneself freely is something we should all be fighting for.

“By becoming better allies we will one day be able to live in a society that is free of hate crime.”

GMCA and the Police and Crime Steering Group have each invested £5,000 per borough to support local events and activities across Greater Manchester that bring communities together and promote community cohesion. Organisations were invited to apply for grants to hold events and activities during the week.

Other activities and events taking place during the week include:

In October last year, the Plan to Tackle Hate Crime was launched which sees local authorities, emergency services and community groups joining forces with the aim to eradicate hate crime in Greater Manchester. More than 800 people helped to contribute to plan, with work now underway to establish scrutiny panels, education programmes in schools and awareness campaigns. Some of the panels already established include an LGBT Panel and the Disabled People’s Panel, which have been created to support the development of policies and drive meaningful change.

Those who want to report hate crime and hate crimes can do so anonymously via www.letsendhatecrime.com, or by calling the police on 101. Alternatively, you can report hate crime at an independent reporting centre, which are available across Greater Manchester.