MAYOR of Greater Manchester Andy Burnham’s proposal to freeze the Mayoral General Precept for the financial year 2021/22 has been approved.

The Mayoral General Precept is part of the overall council tax paid by Greater Manchester residents and is used to fund Greater Manchester-wide services for which the Mayor is responsible. Freezing the precept is aimed at reducing the financial burden on local taxpayers resulting from the Government’s failure to adequately fund vital local services.

At a meeting of the Greater Manchester Combined Authority today (Friday 12 February) made up of all ten council leaders, the Mayor and Deputy Mayor, the freeze was approved by a unanimous vote. This will mean that when residents get their council tax bills next month the Mayoral Precept will remain at £70.73 for a Band B property, split between £51.48 for the Greater Manchester Fire and Rescue Service (GMFRS) and £19.25 for other Mayoral-funded services. This corresponds to £90.95 for a Band D property, with the fire service accounting for £66.20 and £24.75 for non-fire.

The freeze will not impact on GMFRS frontline cover, with the fire service continuing to run 50 fire engines, and with crewing levels unchanged at five firefighters at one-pump stations and four firefighters on each engine at two-pump stations.

GMFRS has been under significant funding pressure caused by Government cuts since 2010, which saw a decrease from £75.3m to £52.9m in 2020/21 (with additional one-off funding of £2.6m to deal with the COVID-19 pandemic). More funding has had to be raised locally to plug the gap, and since 2017 firefighter numbers have increased from 1,090 to 1,162 as part of the Mayor’s pledge to put the frontline first.

A Bed Every Night

The Mayor’s flagship A Bed Every Night scheme will continue into the next financial year. At least 520 places will be provided across Greater Manchester to people who have been sleeping rough. Since it began in November 2018, A Bed Every Night has helped reduce the number of people sleeping rough from 268 at the peak to 115 at the latest count - a fall of 57%.

Recognising the significant impact that the pandemic has had on young people in Greater Manchester, the Mayor will extend the Our Pass pilot by another year as part of his 2021/22 budget. Our Pass was launched as a two-year pilot in September 2019, giving those aged 16-18 access to free bus travel and reduced tram tickets. Since then, more than 70,000 cards have been issued, and free bus travel and access to Our Pass opportunities have been extended to care leavers up to the age of 21, with 337 taking up the offer so far.

The modest increase of £7.77 for a Band B property, or 15p per week, for the Police Precept (£10 a year for a Band D property or 19p a week) was already approved by a recent meeting of the Greater Manchester Police and Crime Panel. The increase will help to fund an additional 325 police officers and their training and equipment; a new approach to safeguarding, with 150 officers to keep our most vulnerable victims safe; and initiatives to reduce death and serious injury on the roads, supporting conventional enforcement with a more localised approach to educate drivers, including pilots of community led speed-watch schemes.

The police precept increase is needed to help provide the service people in Greater Manchester would expect to keep them safe, and is set against a backdrop of £215m of central Government cuts to police funding between 2010-2019. This saw a loss of 2,000 frontline officers. Since 2017, there are now 1,000 extra officers, slowly building back the numbers lost. 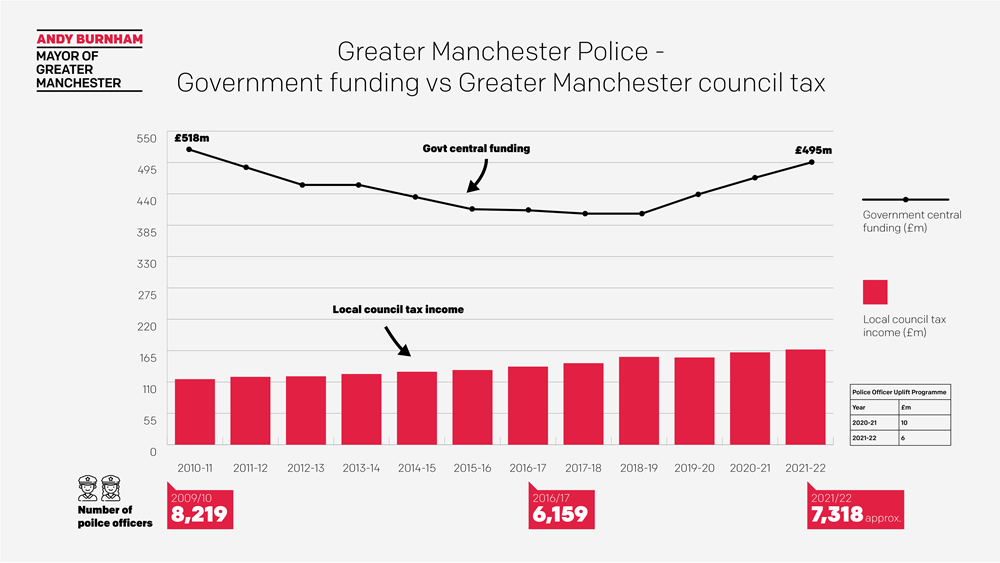 Mayor Andy Burnham said: “We’re now almost a year into this crisis, and in setting out this budget I did not want to create an extra financial burden for people across Greater Manchester. That is why I proposed a freeze to the Mayoral precept, and I’m pleased to see it passed with a unanimous cross-party vote by our leaders.

“At the forefront of our minds is the need to secure key public services while supporting people and the Greater Manchester economy as we come out of the pandemic. With this budget we will maintain our fire service at its current levels, we will continue to bring people indoors and offer them support through A Bed Every Night, and we continue will help the young people whose lives and education have been disrupted by continuing the Our Pass pilot.

“Recognising the pressures our people are facing, but also the challenges that Greater Manchester Police has experienced, we have decided to maintain a police precept of £10 for this year. This precept allows us to continue to repair the damage to the frontline by helping to recruit an additional 325 officers, and to get resources into the districts.

“We are doing our bit to support vital local public services to help those who need it the most, but we also need the Government to do more by properly funding our councils. We will not be able to level-up this country after the pandemic on the shattered foundations of local finance.”

Bev Hughes, Deputy Mayor for Policing, Crime, Criminal Justice and Fire, said: “The modest increase in this year’s police precept will help us continue the progress we have made since 2017 in increasing the number of frontline officers, and also to deliver a series of important measures to strengthen the service provided by Greater Manchester Police, including a new safeguarding unit, investment in resources to help young people, and programmes to enhance the service and support that victims receive.

“Since 2018 the police precept has helped fund an additional 667 police officers and a named officer for every ward in Greater Manchester, but it is no substitute for the millions that have been cut from police and fire service budgets since 2010. Our message to the Government is clear: we have once again stepped up to ensure fair and sustainable funding for our public services. Now they must do the same.”

The budget passed today means the total amount of the precept - fire and other mayoral functions, but not police - for 2021/22 will be £70.73 for the average Band B property in Greater Manchester.