This article was originally published on 23rd January 2018

Mayor proposes balanced budget to protect essential services, keep bills as low as possible and achieve our vision to make Greater Manchester one of the best places in the world. 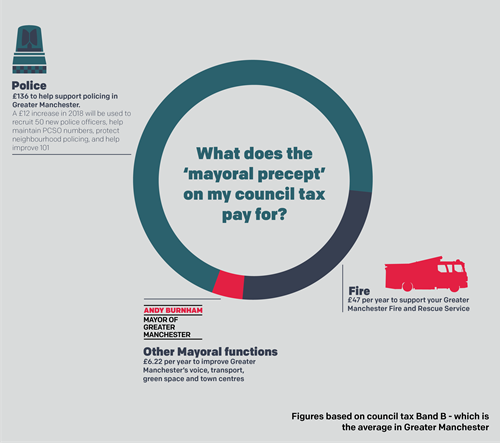 Mayor of Greater Manchester Andy Burnham has announced proposals for how much Greater Manchester residents will be asked to contribute to policing, the fire service, and other mayoral priorities, including addressing congestion, rough-sleeping and the major rewrite of a homes and jobs plan to reduce the amount of green space taken for development. If agreed these will be added to local council tax bills when they are set by each of the 10 Greater Manchester councils.

Essential services across Greater Manchester will be enhanced with additional police officers recruited and PCSO numbers to ensure a visible police presence in every community.

Following a public consultation, and approval from the Police and Crime Panel, the police element of council tax is set to rise by £9.33 this year for the average council tax bill (Band B) in Greater Manchester – that’s less than 78p per month.

Mayor Andy Burnham said: “The Government’s decision to cut Greater Manchester Police for the eighth year in a row, when the threat level remains high and crime is rising, means we have been left in a difficult position with no real choice but to ask our residents to fill the gap. And with this extra funding GMP will be asked to strengthen neighbourhood policing, ensure a strong police presence across GM and accelerate improvements in the 101 service.”

The budget for Greater Manchester Fire & Rescue Service will be protected and more firefighters are being recruited to address shortages.

An annual charge to help deliver Mayoral priorities is proposed to be set at £6.22 a year for the average council tax bill (Band B) in Greater Manchester.

As part of the overall budget package:

Greater Manchester faces big challenges: tackling congestion on our roads; building an affordable bus and public transport system serving all of our communities; eradicating rough-sleeping by 2020; developing a plan for affordable housing that better protects green sites; improving air quality; and realising our goal of becoming the UK’s leading digital and green city.

To develop plans to meet these challenges, it is proposed that a new Mayoral precept be set at £6.22 per year for the average Greater Manchester household.

In the past nine months, Greater Manchester has secured more than £250 million of extra funding from the Government. This money has only been offered to Greater Manchester because it is a Mayoral Combined Authority. Areas without one, like West Yorkshire and the East Midlands, have missed out.

£1.8m Social Impact Bond to help those homeless people most in need

£2m from the Mayoral Capacity Fund

That means that for the £6.22 charge per household, the Mayor, working with our Combined Authority council leaders, have brought in additional funding worth £208 per Greater Manchester household.

The proposals were discussed at January's meeting of the Greater Manchester Combined Authority, ahead of the final budget-setting meeting on 20 February. At the January meeting, GMCA also approved its transport and general budgets. You can read the reports here.

“I recognise that it is a big ask for people to pay more, especially in these difficult times. But, at the same time, I am facing pressure from the public to go further and faster on tackling homelessness and congestion while protecting green spaces. I have tried to get the balance right, keeping bills down but also keeping Greater Manchester leading the way.”

Since being elected, Andy has:

As part of the increase in the policing element of council tax, the Mayor and Deputy Mayor Bev Hughes have pledged to use the additional £8m raised to:

The Deputy Mayor, Bev Hughes said: “The Government is cutting GMP once again and passing the buck on to local people. This is wrong and they are gambling with public safety at a time when threat levels are high.

“But in these circumstances we need to act to support frontline policing. This increase will not make up for the hundreds of millions of pounds the government has cut from our police service, but will help to mitigate to some extent the worst effects of these continued cuts.”

During a recent public consultation exercise, 74% of the more than 1,800 people who answered the question backed the increase.

For Greater Manchester Fire and Rescue Service, Andy has pledged that the budget will be protected. He recently announced that he was postponing a proposal to reduce the numbers of fire engines available in Greater Manchester. At the same time, plans to recruit more firefighters to fill a vacancy gap are being accelerated.

The fire service element of council tax will remain at just under £47 for the average Band B property.

For the average home in Greater Manchester, people will be paying £7 more for Mayoral action on transport, homelessness and housing and £9.33 more for policing.

Before his untimely death, Cllr Kieran Quinn was leading work on the 18/19 budget as part of his role as Finance portfolio holder. The Mayor said: “I would like to thank all our council leaders for working with me to get this package right. But I want to pay particular tribute to Kieran Quinn. Kieran was instrumental in delivering the devolution deal and, through the work that he did to prepare this budget package, he has helped lay the foundations for the next chapter of Greater Manchester’s development. Kieran’s legacy is immense and we will work to do justice to it.”

Council tax is paid by households and is based on the value of their property. That means that some people pay more, and some pay less than the figures cited, but it’s important to give an average as this gives a sense to residents of what the cost is. Nationally, averages are usually shown based on a Band D property – but in Greater Manchester most people pay less as more than 82% of properties are in either Bands A, B or C. That’s why we’re quoting Band B here as it is the average.

The table below shows the percentage of households in each of the bands:

The table below shows the cost to residents in each council tax band for the Police precept, as well as the percentage of Greater Manchester households that will pay each rate:

This table shows what people will be paying, for police, fire and the new mayoral charge 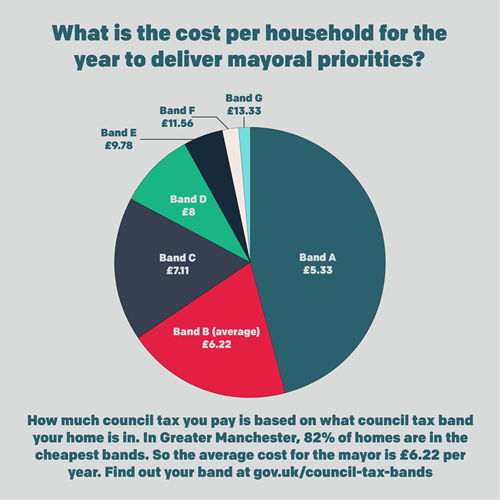 This story was updated with new figures, to reflect the reduction to the proposed mayoral precept which was announced on 16 February.