A Bed Every Night scheme to continue this winter; Mayor warns of increased pressure on services

New figures show that for the second consecutive year the number of people sleeping rough in Greater Manchester has fallen, bucking the previous trend of substantial year-on-year increases since 2010.

The latest fall of 19% continues the downward trend first recorded in January with the publication of the official rough sleeper count, which revealed a decrease of 8%, the first time rough sleeping had fallen in Greater Manchester in almost a decade. Since 2010, rough sleeping had been increasing, reaching a high of 268 people in 2017.

As winter approaches and temperatures start to drop A Bed Every Night, the Mayor of Greater Manchester Andy Burnham’s ambitious and ground-breaking scheme aiming to help end the need for rough sleeping in Greater Manchester city-region by 2020, has entered a second more intensive phase. More than 400 beds are due to be ready within a week for people sleeping rough.

With a bigger outreach workforce than ever before, with new data systems to share information and co-ordinate responses, with significant investment in accommodation and support that goes far beyond the statutory duty of local authorities, the city-region is working as one to make a real, sustainable difference.

Andy said: “While fewer people are sleeping rough in Greater Manchester than when I came into office, I am not in any way complacent and know so much more needs to be done. But these figures show that the commitment of our councils and community organisations is making a real difference, and I want to thank everyone for making A Bed Every Night such a strong response to the homelessness crisis.

“As a result, Greater Manchester is entering the coming winter with a stronger set of arrangements for people sleeping rough than we have ever had. We have more places to stay of a better quality and are well on the way towards our goal of ending the need for rough sleeping.”

The latest GMCA data on people sleeping rough in the city-region is as follows: 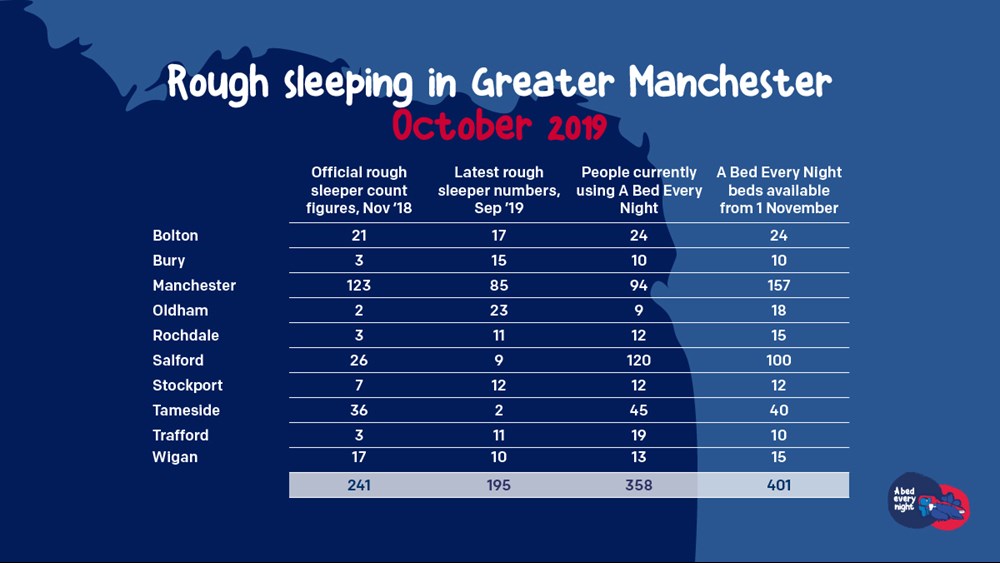 In total more than 2,200 people have benefitted from A Bed Every Night emergency accommodation since the scheme was launched in November 2018. Since then, individual Greater Manchester boroughs have been effective in assisting people from a life on the streets into emergency accommodation; in Salford 120 people are in A Bed Every Night provision with 9 individuals counted as living outdoors, while in Tameside 45 people are indoors with a fraction of that amount still street homeless.

More than 400 beds will be available at the start of next month, with the largest numbers located in Manchester – which also has the largest rough sleeper population – and Salford. The amount of beds commissioned in districts has been agreed with individual local authorities – they represent the minimum commissioned provision for A Bed Every Night and councils are able to, and frequently do, commission more to meet demand.

In boroughs where those accommodated currently exceeds the number of A Bed Every Night beds, other resources including statutory temporary accommodation and Housing First are being used to meet the needs of people known to be rough sleeping. All boroughs are working hard to source a greater local supply of longer-term accommodation for more established A Bed Every Night customers to move into when appropriate.

Phase 2 of A Bed Every Night is funded through a comprehensive £6m package from a range of partners including the GMCA and with £2 million from the Greater Manchester Health and Social Care Partnership (GMHSCP). As well as improving the quality of accommodation, there will be more training for front-line staff and volunteers and improve signposting, screening and assessment into relevant health services.

A Bed Every Night is just one of a wide variety of schemes and systems supporting people who are homeless, or at risk of becoming homeless, in Greater Manchester. The city-region’s Housing First pilot, backed by £7.6m of government funding, has so far assisted more than 33 of the most entrenched rough sleepers into supported accommodation, while the Social Impact Bond has helped a further 311.

For further information about A Bed Every Night, including information on how to donate or give your time, visit the new-look website www.bedeverynight.co.uk or follow #BedEveryNight on Twitter.